While almost all trekkers who visit Patara walk the Lycian way to Delikkemer via the aqueduct, few people take the long way round, via Vali point. In some ways this is not the best of treks due to the prevalence of trekking on the forest roads, the views that you are awarded as you trek are a treat. From Delikkemer you descend past the striking turquoise of Firnaz bay, to the rocky coastline hiding many coves perfect for a dip. As you climb up the hill above Patara the vie

While the magnificent remains of Patara, Xanthos, Tlos, Patara, Myra, Phaselis etc. are well know and documented, the mysterious remains of the first settlers in Lycia are to be found in the hidden fastness of the inhospitable looking mountains of central Lycia, between modern Kaş and Kalkan. The dissolute and overgrown archaic period buildings around Islamlar, Bezirgan, Sarıbelen and Gökçeoren are in few archeological texts and the names of the settlement are generally unrec

Walking the Strawbery Ridge. Asar to Phellos. A trek on the Lycian Way.

The south coast of Turkey differs from the western Aegean coast in that while the Aegean is made up of lines of hill perpendicular to the sea, with the warm maritime air drifting up the valleys far inland, on the southern coast, the mountain run parallel to the sea, making a very sharp divide between the narrow coastal strip and the continental climate zones only 15 km inland. With the sun bleaching the south faces of the mountains, the norther faces are cooler and damper, i

Second Spring on the Lycian Way

Lycia, known by the Hittites as the Land of Light (Lukka - Lux in Latin)ends it's long hot summer with a spectacular storm, bringing much needed water to the parched soil. The first storm usually comes in October always accompanied by spectacular fork lightening and this year by a few destructive tornadoes! After the rains the seeds germinate and the plants that have braved the summer, dormant under the soil sprout, the red soil becoming a green carpet in a matter of days.

Trek to the churches of the Lycian Heretics

A trek on the St Nicholas Trail and Lycian way, following the trail of the heretic christians of Lycia

Anti - Phellos. The Lycian Way from Port to Fortress.

We walked straight from Kaş, the ancient Antiphellos. Antiphellos means 'against Phellos', figuratively 'below Phellos' or 'port of Phellos'. The trek route is well parked and about 12 km in total. Distance is not great but you will climb up 900m of vertical ascent! The site of Phellos is overgrown and has never been fully excavated. Recently there have been some illegal digs which have exposed a mosaic near the heroon. #lycianway #Kaş #Antiphellos #Phellos #Trekking 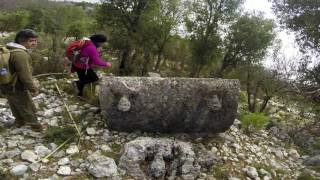 From seat of the Dynasts to the seat of the Oracle. A normal journey along the Lycian Way.

From the rocky outcrop of Trysa, the rulers of Central Lycian could look down on their dominion, with views to the Gelodonya cape in the east to the sound of Kekova in the south to Phellos, the next major city in the west. At the height. At the height of their wealth, as a part of the Persian empire, the ruling family built the 'Heroon', a hero's tomb. This grand mausoleum was on the high ridge of Trysa, a walled sanctuary, the upper stones of the walls were decorated with

Check back soon
Once posts are published, you’ll see them here.

Sidyma to Gey. Faces of the Ancients, The Sea and the Mushroom Valley.... An alternative trail off

Trek on the Lycian Dolomite Coast, to the city of Apollo. A brush with the Satyrs ( fortunately non-

Walking the Strawbery Ridge. Asar to Phellos. A trek on the Lycian Way.

Second Spring on the Lycian Way